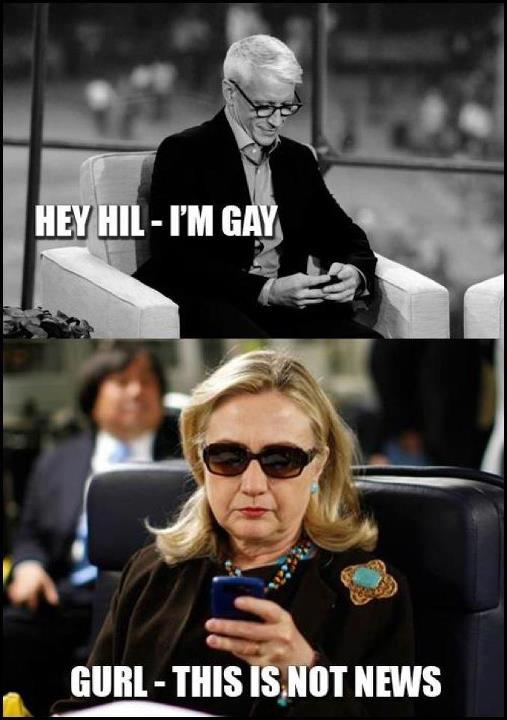 I am a middle-aged gay man and I just want to thank you.  Thank you for coming out of the closet today.  For saying to the world, “I’m gay.”  Of course, the graphic above is funny ~ and I personally will do anything for a laugh, so I had to share it ~ but don’t let it undermine the fact that what you did today was important.  Whatever we knew, or thought we knew, we needed to hear you say it.  It is the most important thing we can do for our LGBT children.  You have become another gay person they can look to when they hear words like “immoral” ~ when they hear angry voices condemning them ~ when they witness polls being taken and votes being cast which conspire to tell them that their equality is far from a reality ~ when they hear debates which confirm for them the fact that this country has not yet reached a conclusion as to whether they’re wanted here, participating fully in the American dream, with the same rights, responsibilities and opportunities as their straight counterparts ~ when they read about violence against gay people.  You have become another gay person for whom simply stating who they are isn’t “too personal.”  You have taken us one step closer to an ideal ~ that being out of the closet is no more or less personal than knowing that Katie Couric was married and is now a widow, that Diane Sawyer is married to Mike Nichols or that Joe Scarborough has a wife and children ~ that simply knowing someone is gay is no different than knowing that they are straight ~ that speaking about our lives in the exact same way that straight people speak about theirs is not somehow more intimate or revealing.

You were brave to come out.  As those who came before you lessened your need for bravery, so too does your coming out lessen the next person’s need.  And so it goes.  Until the need for bravery has vanished.  May our LGBT children never know that once upon a time coming out was something someone did “when they were ready.”  May they never have to call upon any bravery to tell people who they are or to live their lives openly and freely.

Thank you, Anderson, thank you, for pushing us one step closer to that ideal.

The full text of Anderson Cooper’s coming out email to Andrew Sullivan is below, via The Daily Beast ~

Andrew, as you know, the issue you raise is one that I’ve thought about for years. Even though my job puts me in the public eye, I have tried to maintain some level of privacy in my life. Part of that has been for purely personal reasons. I think most people want some privacy for themselves and the people they are close to.

But I’ve also wanted to retain some privacy for professional reasons. Since I started as a reporter in war zones 20 years ago, I’ve often found myself in some very dangerous places. For my safety and the safety of those I work with, I try to blend in as much as possible, and prefer to stick to my job of telling other people’s stories, and not my own. I have found that sometimes the less an interview subject knows about me, the better I can safely and effectively do my job as a journalist.

I’ve always believed that who a reporter votes for, what religion they are, who they love, should not be something they have to discuss publicly. As long as a journalist shows fairness and honesty in his or her work, their private life shouldn’t matter. I’ve stuck to those principles for my entire professional career, even when I’ve been directly asked “the gay question,” which happens occasionally. I did not address my sexual orientation in the memoir I wrote several years ago because it was a book focused on war, disasters, loss and survival. I didn’t set out to write about other aspects of my life.

Recently, however, I’ve begun to consider whether the unintended outcomes of maintaining my privacy outweigh personal and professional principle. It’s become clear to me that by remaining silent on certain aspects of my personal life for so long, I have given some the mistaken impression that I am trying to hide something – something that makes me uncomfortable, ashamed or even afraid. This is distressing because it is simply not true.

I’ve also been reminded recently that while as a society we are moving toward greater inclusion and equality for all people, the tide of history only advances when people make themselves fully visible. There continue to be far too many incidences of bullying of young people, as well as discrimination and violence against people of all ages, based on their sexual orientation, and I believe there is value in making clear where I stand.

The fact is, I’m gay, always have been, always will be, and I couldn’t be any more happy, comfortable with myself, and proud.

I have always been very open and honest about this part of my life with my friends, my family, and my colleagues. In a perfect world, I don’t think it’s anyone else’s business, but I do think there is value in standing up and being counted. I’m not an activist, but I am a human being and I don’t give that up by being a journalist.

Since my early days as a reporter, I have worked hard to accurately and fairly portray gay and lesbian people in the media – and to fairly and accurately portray those who for whatever reason disapprove of them. It is not part of my job to push an agenda, but rather to be relentlessly honest in everything I see, say and do. I’ve never wanted to be any kind of reporter other than a good one, and I do not desire to promote any cause other than the truth.

Being a journalist, traveling to remote places, trying to understand people from all walks of life, telling their stories, has been the greatest joy of my professional career, and I hope to continue doing it for a long time to come. But while I feel very blessed to have had so many opportunities as a journalist, I am also blessed far beyond having a great career.

In my opinion, the ability to love another person is one of God’s greatest gifts, and I thank God every day for enabling me to give and share love with the people in my life. I appreciate your asking me to weigh in on this, and I would be happy for you to share my thoughts with your readers. I still consider myself a reserved person and I hope this doesn’t mean an end to a small amount of personal space. But I do think visibility is important, more important than preserving my reporter’s shield of privacy.