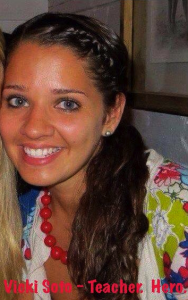 On Saturday night, as my husband and I sat watching the news, too under the weather and stunned by Friday’s horrors to attend our yearly circuit of holiday parties, we heard how 27 year old Vicki Soto had protected her class:  by putting them in closets, by hiding them in her classroom so that the shooter might not see them.  It worked.  Vicki Soto’s students survived.  She did not.

My husband, a fifth grade teacher, turned to me and said, “There’s nowhere in my class to hide my kids.”

I had to make him stop talking.

My husband teaches ten year olds.  His job ought to include sparking their imaginations, eliciting wonder, worrying about a student who’s not reading at their grade level and trying to keep his class on task the day before Christmas break.  His job ought to be to educate children.  That is plenty.  That is enough.

His job should not include understanding tactical strategies for protecting his students from a lunatic with a semi-automatic weapon.

He teaches ten year olds.  He should not be worried about protecting himself.

And yet, here we are.  Years and years and years of hearing that curbing access to guns won’t solve the problem has led to complete paralysis.  As if we must retain easy access to semi-automatic weapons because getting rid of them won’t solve the problem completely.  Ok.  It probably won’t.  But how did that translate into “there’s nothing we can do”?  How is it possible that our American exceptionalism, which we pride ourselves on, which can put a man on the moon, is somehow impotent in the face of such tragedies?  Would anyone argue that incremental solutions are worth it if they can save even a few people?

Today my husband, and teachers across the country, will march themselves back into their classrooms, shaken to the core themselves, and deal with the questions and the fear and the reactions of their students.

It is undeniable that heroes were made on Friday.  And heroes will be made again today.  When our nation’s teachers try to comfort their students while they themselves are so completely unsettled ~ when they try to explain to their students an inexplicable event ~ when they are once again charged with dealing with something so completely beyond the scope of their job.

To listen to many in our nation one might conclude that the problem is that our teachers are overpaid and under-armed.

Is this the kind of country we want to live in?

President Obama, it is time.  Now is the time to stop creating heroes.  Wouldn’t it be fantastic if we spent a year or two or three or ten without creating one single hero?  For every hero there must necessarily be at least one victim.  No more.  We have enough.  We’ve had enough.

We need your strength and your resilience and your perseverance so that ours might stop being tested.