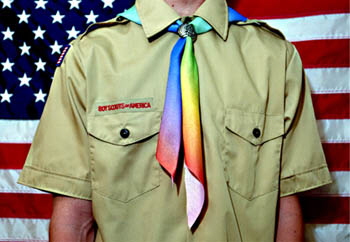 A few months ago, on this issue of honesty, you decided not to decide.  At least not just then.  In the statement you made to the press you called this an issue with a great deal of “complexity” and said that “the organization needs time for a more deliberate review of its membership policy.”

Those were the words of cowards.  Cowards afraid to upset anyone.  Well, Boy Scouts, it’s too late for that.  Someone is going to be upset, so make a decision already.  For decades, this debate was one-sided, giving it the sheen of common sense, of fact.  There was only one group to upset:  the misinformed ignorant propagaters of hatred.  LGBT voices remained hidden and silent.  Silent in our lives.  Silent in our families.  Silent in our communities.  Silent in the world.

In the interest of full disclosure, I was not a scout.  I have no ties to the organization whatsoever.  But I can tell you for a fact that the debate here is not whether to admit gay scouts, the debate is over how you will treat the gay scouts who are serving now and who will serve in the future.  Because gay scouts are already there.  Gay scout leaders are already there.  How can I know this, never having been a scout?  I know this because my husband was a scout.  I know this because we are everywhere.  In every organization.  At every meeting.  In every workplace, church and family.  We exist.  I don’t know of anyone, be they pro- or anti-bigotry, who would disagree with that fact.

It seems to me that a basic tenet of scouting is honesty and integrity and yet you are currently teaching each and every one of your scouts ~ gay, straight, bi, whatever ~ that lying is not only acceptable, it is necessary.  It seems to me that the religious right only believes in honesty when it suits them, for they would have our gay children grow up in a world where lying is a necessity.  They would have our straight children grow up in a world where they are forced to lie to protect a friend from the repercussions of their honesty.  And, most disturbingly, the religious right tosses honesty out the window completely in any conversation regarding what role gay people should have in society.  At that point, they have no issue whatsoever with lying, with discarding science, with jettisoning their own experience of their own sexuality and with equating pedophilia to a sexual orientation ~ a dangerous and disturbing connection that always leads me to wonder about the sexual maturity of the person doing the equating. If they can’t tell the difference between consent and rape, then it is they who need to be investigated and not left alone with children.  Perhaps you should consider that while debating your newest discussion/proposal ~ to allow gay children in the scouts while banning gay adults.  That is not forward motion.  That is a disgusting and cowardly capitulation to the basest of all lies told about gay people.