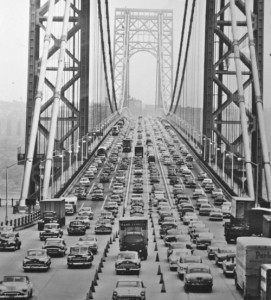 Mark Twain wrote:  “If you tell the truth, you don’t have to remember anything.”

Well, kind of.  I mean it’s accurate, but incomplete.  As the Christie administration recently discovered, there’s another adage that only the remarkably arrogant or unbearably stupid ever forget:  Never put anything in writing!   I’m guessing the people involved in the George Washington Bridge scandal ~ a bridge named, ironically, after a man who could not tell a lie ~ are both.

Take a moment to consider:  Have you tried to tell a lie recently?  Even a little white one?  It’s impossible.  Our every breath is now splayed out across multiple platforms, apps, tags, check-ins, tweets, posts, pics and likes, each incestuously tethered to one another in a crisscrossing pattern that echoes and repeats like a fun house infinity mirror.  “Oh, what a tangled Web we weave” indeed!  The technology ostensibly designed to make life easier has done nothing but complicate everything.  We all live our lives, to some greater or lesser extent, in public.  Willingly.  And whether we are posting backyard burger pix or criticizing those who do, we are all just waving our hands in the air saying, “I exist.  Pay attention!,” and we hurtle forward like comets, leaving behind a trail of virtual debris.

And as we discovered yesterday with the Christie administration, and as we discovered with General Petraeus before him, and as we will likely discover again with some idiot ~ our emails too are indestructible, eternal, and not all that difficult to access.  Has no one been paying attention to the whole NSA “we’re looking at your emails” thing?

C’mon people!  If you’re going to lie, keep your wits about you!  Do your due diligence!  If you are on a computer, you are in public!  Never in writing!  Never in an email!  Never on the internet!  Never in a text!  And for the love of all that is good and holy, if you’re stuck in bed sick with the flu and some stomach thing that you “really don’t want to get into,” don’t post pictures of you and your ex lounging by a pool in Miami the Friday of a 3 day weekend.  Lying 101:  Don’t do that.  Just don’t.

What we are witnessing is a unique moment in history ~ the survival of the slickest.  Only the most thoughtful, forward-thinking and detail oriented amongst us are truly prepared to not get caught.  Bad liars will soon find themselves extinct.  So, if you just stick around for a generation or two, we should have an entirely new set of politicians and cheaters.  True, they won’t be any more honest, but at least we won’t know that.

In the meantime, try telling the truth, it’s easier.  And to paraphrase Mark Twain, “If you tell the truth, you don’t have to delete anything.”

Posted on Jan 10, 2014 • by Ian • In: All, Current Events/Pop Culture/Politics, Inside Voice •
« Dear Jonathan Capehart ~ Governor Christie ~ Is it Too Much to Ask That You Be Both Honest AND Respectful? »