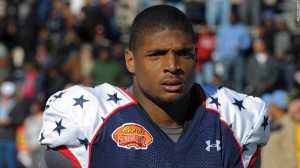 One week has passed since NFL prospect Michael Sam made the historic announcement that he is gay.  Pretty much everyone with a keyboard has weighed in on the subject.  Players to pundits.  Fervent fans to religious fanatics.  The words “distraction,” “difficult,” “scrutiny,” “risk” and “pressure” have all been used when discussing the story.  Even the idea that Sam might not be drafted at all purely because of his coming out has been floated.

We have heard from everyone.  Everyone, that is, except for the only people who could truly help Sam.  Who could mitigate the “risk” he took.  Who could lessen the “distraction” of having an openly gay player on the field.  Who could ease the “scrutiny” and help take off some of the “pressure.”  We have not heard a peep from any of the currently active gay players in the NFL.

I am disturbed and disappointed by the apparent willingness to let this kid go it alone.  As if he is, in fact, alone.  But I find it revealing that the closet is still so deep, the fear of coming out still so powerful, that even now, as it becomes more and more clear that we are everywhere, in every walk of life, even in the wake of Sam’s announcement, no one else has stepped forward to say those two tiny, monumental words.

I hate that coming out is still a courageous act.  But it is.  And the truth is that Sam’s remarkable act of courage just made it a hell of a lot easier for the next guy to do it.  Just as every out gay person who came before Sam made it possible for him to do it.