A Genuine Apology, A Marriage Devastated 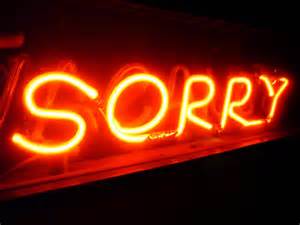 Allow me to brag for a moment. I have a pretty solid marriage. I hesitate to write that because putting it out there feels like an invitation for bad things to happen. A moment fixed in time that all but begs for a Google search should things ever go to shit. But after 16 plus years, we’re still madly in love with one another. And perhaps more importantly, we’re still madly in like with one another. And on most days we somehow manage to squelch the impulse to stab one another with one of the dull, rusty, turn-of-the-century butter knives we received as a wedding gift. Most days.

But recently we came upon a pothole in an otherwise smooth journey. Well, a crevasse, really. A canyon. A large canyon. Ok, fine, the other day we reached the end of Thelma & Louise ~ the major difference being that I knew who was who and neither one of us had had mind-blowing sex in a cheap motel room or been burgled by a soon-to-be-famous Brad Pitt. If only.

So here’s what happened. You know what? It doesn’t matter what happened. The specifics don’t, anyway. All they’re going to do is give you the opportunity cast him as the asshole or me as the crazy one and the side-picking will completely obscure the entire point of my story.

So, specifics aside, let’s just say that my husband pissed me off ~ the instant I walked in the door. Before I could even get my coat off, he pissed me the fuck off. It must have been some kind of record, because nary a nanosecond had passed since we were even within earshot of one another and bam! A single shot fired. A single shot landed. Yet other than for its speed and remarkable deftness, the moment was neither noteworthy nor remarkable. Sometimes we piss each other off. Sometimes we need something from the other that they can’t give ~ or don’t know to give ~ or don’t know how to give. Sometimes our me moments overlap. That never goes well. Listen, marriage goes on for a long time. The sometimes are infinite. This was just one of those instances. I walked in the door. He pissed me off. Flint. Strike. Gas. Boom. Welcome to Tuesday. Nothing to see here, folks, nothing to see. Just a run-of-the-mill Who’s Afraid of Virginia Woolf moment from an otherwise happy couple.

He apologized. He fucking apologized. Not one of those “I would rather eat the rectal secretions from a bowl of puss bloated, Ebola-infected maggots than listen to your armchair analysis of this non-moment for one more unbearable eternity of a second” apologies. Not a “can’t you see I’m in the middle of a fucking movie” apology. Not a “here’s what you did to make me be a dick” apology. No, he genuinely apologized. He meant it. It was so quick. It was the rattlesnake bite of apologies. It came out of nowhere, and it stung. He went on to explain what he did. Unprompted. And then…just when I thought it was over…just when I thought my jaw couldn’t possibly slack any more…that’s when he put the final touches on it. He added that I had done nothing to deserve such a greeting.

And as I stood there, taking it all in, all I could think was ~

(Suddenly the lightning bolt struck me right between the eyes ~ All these years of training him have been a complete waste of time. I should have left him the fuck alone.)

The truth is, I’m still mad. Pissed as hell. What now am I supposed to do with that? Now that you’ve robbed me of my righteousness?!?! What am I supposed to do with the fact that now I’m the douchebag? How did I get to be the dick when I didn’t do anything wrong? It’s a lose/lose. If I don’t accept your apology, I’m an asshole. If I do accept your apology but still find myself angry, I’m an asshole.

THIS IS NOT HOW WE DO THIS! This is not what we’re built on. We’re built on when you’re a dick, I get mad. When I get mad, you toss out a disingenuous apology as a means of chewing your foot out of the trap. When you toss out a disingenuous apology, we argue about it until I verbally beat you into submission, we spend an hour in utter silence and then, and only then, you give me a hug and a genuine apology and we eat dinner. This is one of the basic tenets of our relationship. A pillar! Why are you tearing down our pillars? Breaking up our foundation? We’re built on eye-rolling, tooth-sucking and at least a few hours of general bitchery while the dogs wander about wondering what is going on with daddy and daddy. That is who we are. And it works for us. It gives us time. Time to be annoyed. We need time to be annoyed. You can’t rush that. It’s a process. It’s like a soufflé. Or the Kubler-Ross model of grieving. There are five stages. Not three. Not four. Five. You can’t just rush it. You have to respect the process! Petty annoyance blown out of proportion needs to breathe. It needs space and oxygen. And your quick, responsibility-laden apology, your grace and acceptance of your faults robs me of oxygen. You’re suffocating me ~ smothering me with your maturity. Oh my god, you’re trying to kill me. Thank you. Thank you very much!

How did I get here? All I did was come home! Now I’m mad. Mad at you. Mad at myself. Mad at Obama. Mad at the cancellation of Pushing Daisies. Just mad.

Just so we’re all clear, I said none of this. I gave him a peck on the cheek and said “ok” and we went about our evening. It’s a marriage. Sometimes you have to hide the crazy. Sometimes you just have to lie.