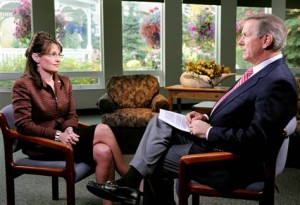 This is an excerpt from that interview:

GIBSON: Governor, let me start by asking you a question that I asked John McCain about you, and it is really the central question. Can you look the country in the eye and say “I have the experience and I have the ability to be not just vice president, but perhaps president of the United States of America?”

PALIN: I do, Charlie, and on January 20, when John McCain and I are sworn in, if we are so privileged to be elected to serve this country, will be ready. I’m ready.

GIBSON: And you didn’t say to yourself, “Am I experienced enough? Am I ready? Do I know enough about international affairs? Do I — will I feel comfortable enough on the national stage to do this?”

PALIN: I didn’t hesitate, no.

GIBSON: Didn’t that take some hubris?

PALIN: I — I answered him yes because I have the confidence in that readiness and knowing that you can’t blink, you have to be wired in a way of being so committed to the mission, the mission that we’re on, reform of this country and victory in the war, you can’t blink.  So I didn’t blink then even when asked to run as his running mate.

Ummmm…WHAT?  You didn’t blink?  You were asked to run for Vice President ~ of the United States ~ of America! ~ which by definition implies that you could conceivably become the President! ~ of the United States ~ of America! ~ and you didn’t collapse into a heap of streaked hair and stilettos?  You didn’t put your head between your knees and hyperfuckingventilate?  Seriously?  Not one single moment of solitude in which you gripped the sides of the sink, looked squarely in the mirror and thought to yourself, “Holy fucking shit!?!?!  Am I ready for this!?!??  AM?  I?  READY?  FOR THIS?!?!?”

No internal questioning?  Nothing?

When I got a Broadway show I was so plagued with doubt I almost threw up a stomach full of blinks and question marks every day for the entire rehearsal process.  And what exactly were the repercussions of my being not being good enough ~ of not being ready?  Behind my back snickering?  A badly executed pirouette?  Angry theatre-goers?  Nothing earth shattering.  Nothing that could put me in touch with a situation like The Bay of Pigs, the dawn of World War II or a financial crisis capable of bringing the entire planet to its knees.

But what began as a shiver of horror at Miss Sarah’s jaw-dropping over-estimation of her skill set and knowledge base has emerged from its apoplectic chrysalis, transformed into the electric tingle of inspiration.  Don’t blink!  In the intervening years I have come to grasp it, own it, hug it to my chest and whisper it to myself so many times that it has become my own personal mantra.  My Bat-Signal.  An indestructible hook from which to hang my most outrageous and egocentric dreams.

In America today, one singular factor is largely responsible for separating success from failure, winning from losing, fame from anonymity:  introspection.  Thanks to the lessons I learned watching Miss Sarah’s not-ready-for-prime-time candidacy, I have come to understand that any internal questioning is not the very human and healthy form of self-censorship I always thought it was.  Oh no!  It is, in fact, the first step towards failure.  I no longer carry any of that pesky self-doubt that so often brings the momentum of inspiration and self-promotion to a grinding, sputtering, exhaust-choked halt.  In its place one must come equipped with a fun-house mirror version of their own talents, accomplishments and readiness for, literally, anything, up to and including a potential ascendency to the highest office in the land.  To be successful, one must simply move forward ~ blindly, and boldly.

Well, fuck it.  If Miss Sarah was ready to leap into the ranks of world leadership without so much as passing “Why me?,” then surely I can pursue my dreams of writing and acting without slowing down for any internal speed bumps.  I mean seriously, even in my craziest, most grandiose visions of changing the world with my utter brilliance and winning charm, I have never once had access to the nation’s nuclear codes.

But I have also discovered that having no sense of introspection ~ of internal borders ~ is not quite enough.  One must also possess absolutely no sense of shame.  None.  Shame is simply too heavy a weight to carry while clawing your way to your fifteen minutes.  In the reality show, 24 hour cable, 21st century America in which we find ourselves, shame is an emotion relegated to losers ~ to those literally not picked for the team.  You must bring to the table a willingness to say incendiary, offensive things (Ann Coulter and Glenn Beck come to mind) and/or put the worst aspects of yourself on parade for a viewing public all too eager to rubberneck the carnage of someone else’s car-crash life in order that they can feel better about their own failings and flailings.  Enter Snooki. 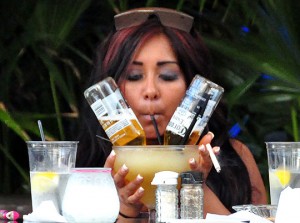 Snooki has written three books.  Three.  Books.  Really?  Does she go to an office or to a job she hates?  No.  She gets drunk. She falls down.  She gets paid.  She wears her hair in a “Snooki bump.”  (Which as far as I can tell is little more than a rebranded beehive.)  She gets paid.  She changes her bump.  Paid.  Loses weight.  Gains weight.  Gets pregnant.  Gives birth.  Paid.  Paid.  Paid.  Paid.  The Real Housewives.  The A-List gays.  The Octomom.  The Duggars.  Donald Trump.  That Kate Plus 8 woman.  The Kardashians.  Carnival side-show freaks all, who seem to take having nothing to offer very seriously.

Well I’m pissed off ~ not at these people for making their way in the world.  Quite the contrary, I want to be them.  My rage is directed entirely inwards, towards myself ~ a sucker ordering paper and unclogging toilets, catering lunchtime meetings where my singular goal is to achieve the nirvana of invisibility while important people conduct important business.  I’m angry and I want in on the fabulous world of money for nothing.  I want a career in lowering the bar.  I want my tax forms to read:  Profession:  Vapid.  I want people to mock my stupidity at the water cooler.  I want to pollute this country with my inanity.  I want to pollute my way to a book deal and speaking engagements.  I want a presidential bid.  No, wait.  I want something better than the presidency.  I want to be on television!  For no apparent reason!  Without the weight of the free world on my shoulders.  They can do it. Why can’t I?

So thank you Miss Sarah and Snooki, for providing me with the inspiration and the courage to move forward with all of my dreams, no matter how ridiculous or out of my grasp they ought to be.  Thanks for showing me definitive proof that Arthur Laurents knew what he was talking about when he wrote this for the musical “Gypsy,” “…to have no talent is not enough.”

Now, who wants to see a picture of my dick?