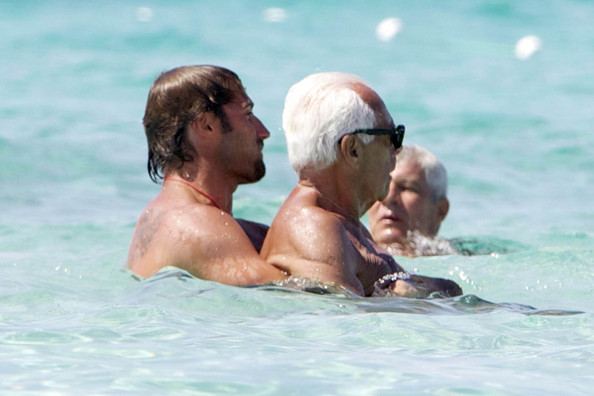 “A homosexual man is a man 100%. He does not need to dress homosexual…When homosexuality is exhibited to the extreme — to say, ‘Ah, you know I’m homosexual,’ — that has nothing to do with me. A man has to be a man.”

Let me tell you a little story, Giorgio. I am Jewish. I don’t believe in God and I am not religious, but I am Jewish. As far back as my family tree goes, on both sides, I am Jewish. I wasn’t raised particularly religious, but we were Jewish. As I was growing up I came to understand that my father was both an atheist and someone who abhorred all organized religion. At one point I said to him, “We don’t believe in God. We don’t go to shul very much. We’re not Jewish.” That didn’t go well. He looked me right in the eyes and said, “When they come for the Jews, they’re coming for you.” Even as a child, I got what he was saying.

I couldn’t help but think about that moment as I read your comments today. As you distanced yourself from the very group you belong to. As you defined yourself as something different than those other gay people, those obviously lesser gay people. Those muscle queens or flamboyant queens or whatever it is you have in your mind that you’re not.

Really, Giorgio? You, an international celebrity. You, who has money and fame and success. You, who has so much, knows so little? How is that possible? Allow me to let you in on a little secret, Giorgio. Those who discriminate against us don’t discriminate within us. I am as you are as RuPaul is. (Frankly, we should both be so lucky.) Those who hate us don’t see the differences you have made up in your head. They see us as all the same. Yet somehow you’ve somehow managed to cast yourself as something different.

Let me tell you Giorgio, you ain’t different. When they criminalize homosexuality, when they try to take our kids and our rights, when we get thrown out of our homes, when we are beaten and killed in the streets, when they come for the gays, Giorgio, they’re coming for you. You can play all the mental gymnastics you want to separate yourself from your LGBT brothers and sisters, but at the end of the day, Giorgio, you’re a faggot, just like the rest of us.