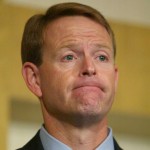 Via The Randy Report ~

While hosting a radio show, Tony Perkins, of the SPLC certified hate group the Family Research Council, explained to a concerned caller why he spends so much time on gay issues and not ~ you know ~ on actual problems ~

I propose that, in tandem with Pride Month, we also make June “Obsessed with Gay Pride Month,”  in celebration of the people such as yourself ~ people like Phyllis Schlafly, Brian Brown, Bryan Fischer, Maggie Gallagher, members of the Phelps family, etc. ~ who spend their time on this planet utterly preoccupied with gay people ~ what we do, who we do it with, where we do it, when we do it, how we do it and even why we do it.  I think we need to honor those of you who spend precious heartbeats traveling, speaking, lying, disseminating fear and hate in the form of misinformation and consumed with distorting any kind of truth or actual experience of human sexuality.  For the life of me, I can’t imagine spending my time in this way ~ but for those of you who do, I think you should be honored with a parade and a month dedicated to you you you ~ to recognize your gay OCD.  (For the record, once all the lies y’all continually tell about us are removed and stripped away, we’re really pretty fucking boring ~ but the truth has never been your strong suit, has it?)

If you’re going to equate homosexuality to drunkenness ~ Scary!  Yikes! ~ you really ought to provide some proof.  Your statement is emotionally stimulating and probably good for your career, but how does such an assertion work, exactly?  For example, I have never once gotten into a car accident while driving under the influence of gay.  I’ve certainly looked at a cute guy when I should have been paying attention to the road, but I’m pretty sure straight guys do the same thing when confronted with a magnificent woman.  Huh…maybe no man should be allowed to operate heavy machinery while struggling with the effects of testosterone.  Maybe your time would be better spent exploring that.

Also, while being drunk might be considered personally destructive, on its own it is not illegal for anyone over 21.  Perhaps you might consider reenacting prohibition.

And while we’re on the subject of drunkenness being destructive, I’d love for you to expound upon the destructive aspects of my personal gayness and 14 year relationship, neither of which have ever once harmed anyone.  Oh no, wait.  There were a few girls in junior high and high school who had crushes on me and surely must have been devastated when they learned of my true nature.  (Between you and me, I really am all that.)  I feel secure in saying that their lives were destroyed by the discovery that the French kisses we shared behind the gymnasium at recess did not elicit quite the same visceral below the belt response in me that they did in the other boys.  Is it these girls you’re hoping to spare from the scars and pain of broken behind the gym, French kissed promises?  Please advise.

And as far as Adulterer Pride Month ~ Hey, if the adulterers are dumb enough to march in a parade, I say more power to ‘em.

And finally, I think the caller’s conclusion is maybe my favorite part of your conversation about Gay Pride Month ~

Caller: Most of the problems that Christians have is that you don’t see people that are drunken or adulterers trying to force their beliefs on others, you don’t see them trying to you know instill their ideals on others.

Actually, that’s not entirely true.  For starters, adulterers need at least one other person to believe as they do or they would have no one to adult with.  And no, most drunks don’t try to “instill their ideals on others.”  I can, however, think of another group of people that does that.

Posted on Jun 13, 2012 • by Ian • In: Current Events/Pop Culture/Politics, Write the Power •
« Hitler Really Upset About Royal Caribbean on the Tonys Bacon Sundae? »