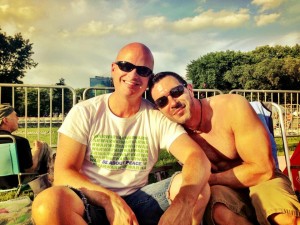 Eventually I just gave myself over to it.

It is a big deal.

Rick & I are going into NYC today.  To get married.  For the fifth time.  But today will be our first “marriage.”

It didn’t start out feeling special.  This time around was solely to ensure that we are protected by a “we” bubble when I go into the hospital next week.  The thought that someone might bar Rick from my room, ignore him or treat him as some kind of stranger should a decision need to be made on my behalf, was beyond hideous.  I needed to know that all who come in contact with us know who he is and treat him accordingly.

No big deal.  We’ve done this before.

We asked my friend Deb to be our witness.  We were going to ask a stranger, but when we were asked last week to be witnesses to a couple we had never met I realized that the time commitment might make it difficult to find someone.  You have to wait to sign the official document and then wait again to literally witness the couple getting married.  Like any government office, waiting is not just expected, it’s an established tradition.

Waiting with this couple ~ getting to know them, bearing witness for them ~ should have been the first sign that my nonchalance towards my own marriage license was misguided.  They’ve been together for thirty years, are from out of state and came to NYC to finally, finally tie the legal knot.  I should have recognized within myself that this is a big deal, because as these two men married I was overcome with emotion.  These men who had been strangers to us just an hour and a half prior to their “I do”s ~ these men whom I felt honored to witness ~ made me cry.  I should have realized.  This is a big deal.  But I didn’t.

Deb asked if she could bring her husband, Jonathan.  I said, “No.  Not necessary.  It’s no big deal.”

I then realized that Stephen, my bff since my first day of college, would be home from working out of town.  He lives just a few blocks from City Hall.  I should tell him, I thought.  “Listen, if you can come, great.  If not, no big deal.”  As excited as he could be, he asked if he could bring his boyfriend.  ”Sure.  Why not?”

Then, through a series of emails, Joan, my  friend, mentor and voice teacher, found out we were getting married.  She wanted to know if she and Norm, her life partner, could join us.

I called Deb.  ”If Jonathan wants to come…”

At this point I had to let Loren, the woman who, nearly 20 years ago, before kids and husbands and mortgages and knee replacements, spent six glorious months on my shoulder as we danced the Hand Jive through Europe, know that something was happening.  “Listen, you’re going to see pictures on Facebook.  I don’t want you to think that we didn’t invite you to something.  You were already there, at the first one.  The one in 2000.  The one presided over by a rabbi.  The one with the big party that my parents threw.  The one with the anniversary that we actually celebrate.  The one where you made sure I had a cocktail in my hand at all times.  You were there.  So we’d love to have you there on Thursday.  But really, you’ve done this already.  We’ve done this already.  It’s no big deal.”

Our paperwork wedding had turned into something that people were going to feel left out of.  I had to tell my friend Sally.  “If you want to come, please come.  We’d love to have you there.  But if you’re working or packing.  If you have class.  It’s no big deal.”

Finally, my mother voiced her disappointment and regret that we hadn’t planned this better and that she couldn’t be with us on our “wedding” day.  Yesterday she discovered Facetime.   She and my father will be at our ceremony, virtually.

After spending a week pushing the big dealness away ~ after a week of fighting it ~ I just gave in to the rush, the momentum, the tidal wave ~ the breathtaking love that we are fortunate to have in our lives.

But what’s the big deal?

The big deal is this:  it is different.  It is different because of the word.  Because of the state recognition.  Because of the federal recognition.  Of course, there’s still work to be done in my home state of Jersey, where my marriage won’t be recognized.  There’s still a massive amount of work to be done on behalf of all LGBT Americans living in states where their relationships have no status whatsoever.  States where fear of LGBT relationships fills the coffers of anti-gay candidates and fuels Constitutional amendments.  We still have work to do in all the states where LGBT people can still be fired for simply being.

And as I gave in, allowed myself to be taken by current, I realized why we are winning.  We are winning because of the tone inherent in both sides of this “debate.”  We are winning because we want to celebrate a wedding.  The beginning of a marriage.  The promise from one adult to another that they will face the world together, no matter what.  The promise that from this moment forward, me becomes us; I becomes we.  And even though we all know the marital statistics, we stand and we celebrate anyway.  We witness.  We share.  We kiss.  We smile.  We hug.  We cry.  We wish.  We revel in the ridiculous optimism.  That anyone should find that person.  We celebrate and we toss “mazel tov”s.  Two people love and want to take care of each other.  Beautiful!

While our opponents stand on the sidelines scowling and growling at the…at the what?  I don’t even know anymore.  I’m not so sure they do either.

So I finally gave myself over to it.

In the words of the great Joe Biden, Vice President of the United States of America and infamous front-man for the filter-free, “This is a big fucking deal.”

To my “fifth” husband I wish another happy wedding day.  I love you.  I’ll marry you another five times, if necessary.  But good god I hope it’s not.