To My Husband, On Our 14th Anniversary ~ 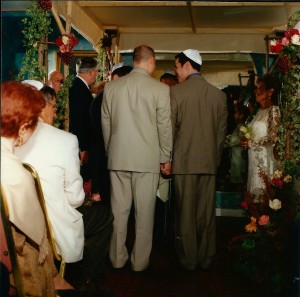 Our wedding ~ the 1st one ~ felt like a graduation. In my head, I knew it was the beginning of something, but really it just felt like an ending. A destination. I had found him. The one! You!!! Our wedding was the exclamation point that followed the long and occasionally winding sentence of my dating life. How was I supposed to know that that moment under the chuppah was less exclamation point than ellipsis? Hey, you don’t know what you don’t know.

So I married you. The man I loved. The man who had me not quite at hello, but so soon after that that loved ones flew to my side to check out both you and my mental state. I remember saying to my mother, only a few weeks after we met, “When you look in his eyes, you’ll know.” And she did. And she did.

A year and a half later, we got married. And although you could never have convinced me of this at the time, the truth is that I didn’t know you all that well. A year and a half is nothing. Nothing. In the same way that 14 will be nothing when we hit 20, 50, 75, 100. I had so much learning to do.

Learning you has been the greatest journey of my life. You are so much more than I ever could have imagined. I knew I was in love. I had no idea I was also in luck. You are a spectacular man. Handsome. Sexy. Warm. Strong. With a wicked sense of humor as sharp as a straight edge and so stealthy most people don’t even know you have it. And you still ~ still! ~ make my eyes cross ever-so-slightly when you see a situation so simply that I have complicated and twisted into an infinite series of untanglable knots. The truth is this: I can no longer see who I might be without you. Not in a co-dependent way ~ Oh, sweet Jesus, I hope not in a co-dependent way! ~ but in a safe way. Because of you, I can be fully me. Fearlessly me. My home with you is the safest space I will ever find.

Fourteen years ago I married the man I loved.

Today I love the man I know.