The War Against (Jewish) Christmas 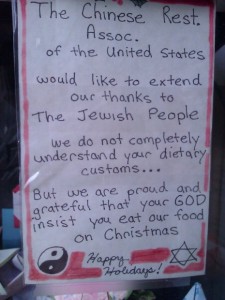 There’s a war going on alright. And it is, in fact, a war against tradition ~ a Christmas tradition. But it’s not a war that Fox News is going to cover.  I’m speaking, of course, of the war on Jewish Christmas.

Everyone knows that Christmas is the day Jews make a pilgrimage to the best Chinese food restaurants. (Yes, the best. Greasy Kung Pao? We’re never coming back. My people don’t play when it comes to Chinese food.) Once we’ve consumed 14,000 calories (most of that in the Shrimp Fried Rice ~ don’t judge ~ keeping kosher “in the house” is another fine tradition), we make our way to the movies. It’s a day Jews spend together that dates back thousands of years. Or maybe just 20 or 30. And maybe it’s really just an American Jewish thing. I don’t know. All I know is that it’s a part of my childhood, my history.

Off we went. Every year. Enjoying the empty roads, empty malls, and empty parking lots ~ until we happened upon our favorite restaurant ~ The Far East. That parking lot was packed ~ cram packed with a veritable who’s who of Jewish suburban society. And damn that place was good. It was so good that we went back at least once a year (on Christmas), even though it had the unfortunate side effect of giving my brother a remarkably upset stomach. My parents, troopers that they were, remained steadfast and undeterred. “But it’s so good!”

And when we went, we would see the Rosenblatts, the Rosenbluths, the Rosenbergs, and the Rosenthals. We’d run into the Puttermans, the Holzmans, the Edelmans, the Perlmans, and the Friedmans. From across the dining room, to the Gottliebs, the Gellers, the Manischewitzs, and the Schwartzs, my parents would mouth, “We’ll see you later at Raiders of the Lost Ark. 7:30 show? Perfect. We’ll save you seats.” It was like going to shul, only everything was in English (except the menu) and the children stayed awake (mostly) and never once asked their parents, “Is it over yet?”

But at some point, this tradition, this cultural phenomenon became appropriated by…well…everyone. And frankly, it’s annoying. My holiday has been co-opted! Distorted! A victim of its own popularity! Now everything is open, there’s traffic on the streets, and you’re just as likely to run into the O’Mallys, the Fords, the Hearsts, and the Astors as you are the Epsteins, the Weinsteins, the Blusteins, and the Steins. Shit is getting downright crowded out there.

What happened? Which Jew let the cat out of the bag? (And no, I’m not referring to the Chinese food.) It was such a peaceful day. It was understood that every single table had a draft from an ill-placed air conditioner vent. It was understood that there would be a line of cars at the front doors to the movie theaters so that Bubby and Zadie wouldn’t have to walk through the slush, God forbid they should fall, break a hip, and need a doctor in whatever farkatke town their children and their children’s children were living in. It was understood that after every bit of movie dialogue someone would scream, “Huh? Wha’d he say?” It was not a silent night, but it was a holy one.

Now it’s gone. Gone like yesterday’s latkes. It seems that a half a day of Christmas is more than enough. What’s the problem? Don’t you all like spending time together? Why must you flee to the confines of a darkened theater? Don’t you have church to go to? A baby to worship? In-law presents to complain about?

Is it wrong to want my holiday back? Probably. Especially since I married a Goy and now actually celebrate Christmas. At any rate, once we’re done with the gifts, we’ll see you all at the multiplex. We’ll be seeing Into the Woods. The Interview? Meh.

Posted on Dec 24, 2014 • by Ian • In: All, Arts & Entertainment, Current Events/Pop Culture/Politics, Inside Voice, Uncategorized •
« A Genuine Apology, A Marriage Devastated Episode I: Another Coming Out »